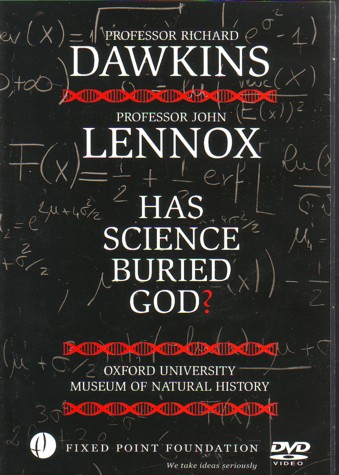 Fixed Point Foundation hosts a second discussion between Professor Richard Dawkins and Professor John Lennox this time in the UK at the Oxford Museum of Natural History. An enthralling topic for scientists, skeptics, and Christians for nearly 150 years, the answer to this question has implications that reverberate through-out public and private live, from government policy and medical ethics to individual choices made every day.

Two scientists return to the Oxford Museum of Natural History, the famed site of the 1860 Evolution debate between Huxley and Wilberforce. Discussing an issue the BBC calls 'as fierce as ever,' the two go head to head in a remarkable match of intellect. Holding the Atheistic position is Prof. Richard Dawkins, celebrated author of the God Delusion and regarded by many as the spokesman for the 'New Atheism.' Opposing Dawkins is fellow Oxford Professor John Lennox. Lennox like Dawkins, has dedicated his career to science, but arrives at very different conclusions. 'It is the very nature of science,' he says, 'that leads me to belief in God.'

DVD - Candle in the Dark: The Story of William Carey

Praying for You Cards - Butterflies (Box of 12)