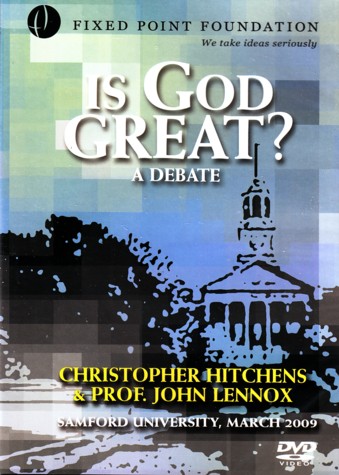 In the Spring of 2009, Oxford Professor John Lennox and journalist Christopher Hitchens came to Birmingham, Alabama's Samford University to debate the question "Is God Great?"

Hitchens, who made his opinion clear on this topic in 2007 with his book God is not Great, maintains not only that God fails to be great, but denies his existence entirely.

This event features a unique blend of both planned remarks and fast-paced dialogue that tackles these issues in a refreshing and informative light.

It is sure to offer insights to all.

"God is not only great.

Prof. Lennox has debated atheists ranging from Victor Stenger to Richard Dawkins and is the author of God's Undertaker: Has Science Buried God?

"This is the worst imaginable kind of unfreedom." -Christopher Hitchens.

Christopher Hitchens is a British-American bestselling author, journalist, and literary critic who has served as a columnist for several prominent publications, some of which include Vanity Fair, The Nation, and The Atlantic.

He is one of the world's most influential and outspoken atheists.

Truth About Man - A Biblical Study of the Doctrine of Man

Politics - According to the Bible