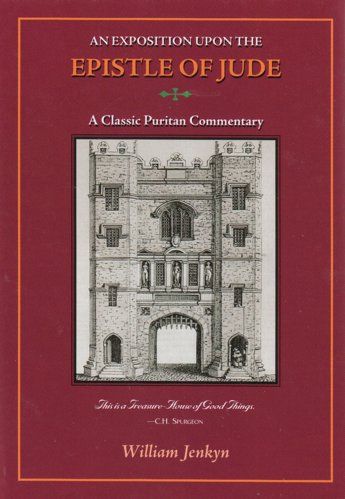 Spurgeon said of this classic Puritan commentary: "A TREASURE-HOUSE OF GOOD THINGS."

Thomas Manton first gave up the idea of printing his work on Jude when he read this masterpiece by William Jenkyn, but later changed his mind when urged by friends. Yet he tell us, "I consulted with my reverend brother's book, and when I found at any point at large discussed by him, I either omitted it or mentioned it very briefly; so that his labours will be necessary to supply the weakness of mine."

Cyril Barber said, "William Jenkyn was a diligent student of the Word, an able expositor, and known throughout England for his piety. We welcome the republication of this outstanding commentary. It is a tribute to the foresight of the publishers that they are making it available to a new generation of Bible students and teachers."

Malcolm Watts said, "The Exposition upon Jude by Jenkyn is beyond praise. In my opinion it ranks as one of the best in the old Nichols series."

Rev. James Sherman, editor of the 1863 edition, wrote the following: "The following Exposition is the most considerable of Jenkyn's works, and exhibits his piety, diligence and learning. It was delivered at Christ Church, Newgate Street, in the ordinary course of his ministry, and met with great acceptance; two editions having been published during the life of the author, both of which have been carefully collated for the present publication. The editor believes that, from the great pains taken to render the work perfect, few errors have escaped detection. He now commits it to the favor of God, who, judging from the testimonies received from many ministers, has crowned the Exposition previously published with a large share of his blessing."