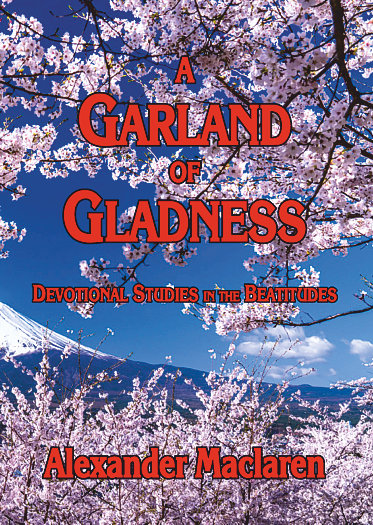 A Garland of Gladness, Devotional Studies in the Beatitudes - CCS by Alexander Maclaren and published by Classics.

The Beatitudes are woefully misconstrued by the mass of human beings, even by Christians who often fail to see their relationship to the Gospel. Maclaren, guided by the Holy Spirit, pulls the veil from our eyes so that we can see for ourselves the intimate connection of the life of a true child of God in relation to the Sermon on the Mount. These Beatitudes are attainable, not by the Law, but only by the power of the indwelling Spirit of God in the regenerate heart of the believer.

He contrasts the two codes, that of Sinai and that of the Sermon on the Mount – the former he pictures as “the savage desolation of the wilderness” on which is was given” and the latter “the smiling beauty of the sunny slope near the haunts of men.” The Law is powerless to make us righteous; it can only hold up before us what we ought to be and do. But grace and truth can give the new nature by which the Beatitudes may be realised, as we hunger and thirst after righteousness.