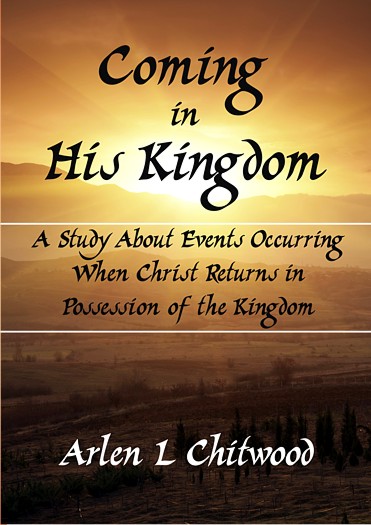 Coming in His Kingdom by Arlen L Chitwood and published by Classics. When Christ returns to the earth at the end of the Tribulation He will be accompanied by Moses and Elijah, along with a great contingent of angels. Christians, having been removed from the earth at least seven years earlier - contrary to common belief and teaching - will not be with Christ at this time.

Numerous events will occur between the time Christ returns and the beginning of the Messianic Kingdom. Christ will be instrumental in an overall scope of these events, Moses will be instrumental in some of these events, Elijah in others, and the accompanying angels in others. Scripture is quite clear concerning not only the different events which will occur but the reason for and the order of these events. The manner of Christ’s return and the events surrounding His return are what this book, COMING IN HIS KINGDOM, is about.

This book begins in the opening chapter with events on “an high mountain” in Matt. 17:1-5, events which have their basis in Old Testament History, with that which they foreshadow set forth in both Testaments. Moses and Elijah appeared with Christ on the Mount, two men later appeared at Christ’s empty Tomb, and forty days later two men appeared on the Mount of Olives at the time Christ was received up into heaven. All of these events are inseparably tied together and are dealt with in this book.

Israel and The Blessing of the Tribes

Prophecy in Light of Today