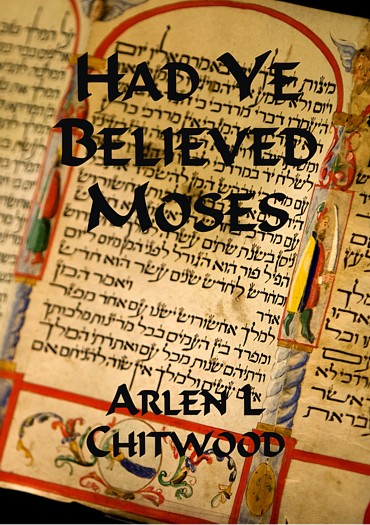 Had Ye Believed Moses by Arlen L Chitwood and published by Classics.

As the Church nears the end of the present dispensation, the damaging work produced by the leaven placed in the three measures of meal very early in the dispensation (Matt. 13:33) has resulted in the prophesied Laodicean state of the Church (Rev. 3:14-21). This,in turn, has resulted in a generation of Christians who know not Moses (cf. Ex. 1:8).

The foundational material, the basics, for every biblical doctrine can be found in the writings of Moses, more specifically in the Book of Genesis. And when earlier revelation is not known or understood, an individual lacks the proper foundation to correctly understand later revelation. Such an individual finds himself in a similar position to that seen among the Jewish people in Israel at Christ’s first coming.

Both have to be perfectly in line with one another, for Christ was the Word made flesh. That seen in the writings of Moses and that seen in the New Testament (the Gospels, the Book of Acts, the Epistles, and the Book of Revelation) deal with exactly the same thing. The foundational material is to be found in the writings of Moses, and the New Testament writers simply wrote about the same thing that Moses had previously written about, building upon previously revealed foundational material. Thus, to properly understand either section of Scripture - Moses, or the New Testament - one must be studied in the light of the other, comparing Scripture with Scripture.