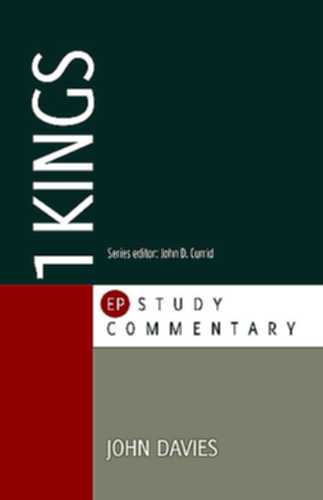 1 Kings recounts what happens to David's kingdom following his death, dealing with why Judah came into the sorry state that led, eventually, to exile. Is there hope in the midst of God's judgement on His people? Dr Davies shows the faithfulness of God, despite the people's unfaithfulness, as a theme that runs throughout the book of Kings. God's power and grace are shown to His covenant people.

The reader who comes to 1 Kings with the tumultuous events of 2 Samuel in mind will be expecting a resolution to them, particularly the narrative concerning the succession (2 Samuel 9–20) and there is considerable literary and theological interaction between the two books.

The division of Kings into two books is a later development, and we must regard the story of 1 Kings as leading into the traumatic Judean exile to Babylon with which 2 Kings concludes. The book of Kings, therefore, finalised some time after the beginning of the exile (though evidently making use of earlier sources), wrestles with the question of how Judah (all that is left of Israel) came to this sorry state, with its glorious temple in ruins and its citizens once more subject to a foreign king. This is no more than the people and their kings deserve, according to the theology outlined in the Pentateuch, particularly the book of Deuteronomy.

Gianna - Aborted and Lived to Tell About It