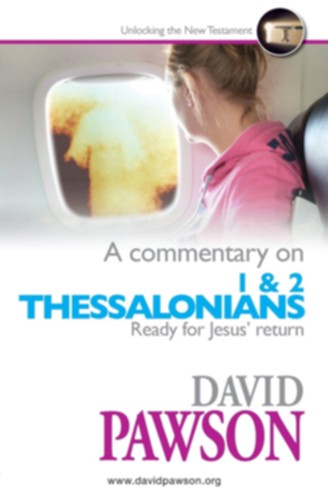 A Commentary on 1 & 2 Thessalonians by David Pawson and published by Anchor Recordings Limited.

Speculation about the second coming of our Lord is nothing new. The saints in Thessalonica were already being misled. Paul's two corrective letters, among his earliest, deal with the issue in a way that is profound and practical, as well as giving details to be found nowhere else in the New Testament. The 'rapture', the man of lawlessness, the temple - these and other features are uniquely here. But there is also much sound advice for those who are 'so heavenly minded they are no earthly use'. Meddling in other people's business, living on the generosity of others rather than earning, despising prophetic words, sexual behaviour that is lust rather than love - these are just some of the arrows that find a target within the church. After two thousand years these letters are as relevant today as they ever were. Paul probably never guessed they would become part of scripture, which God intended to be used until history ended and eternity began.

Lord Is It Warfare? Teach Me To Stand **

Seven Prayers That Will Change Your Life Forever