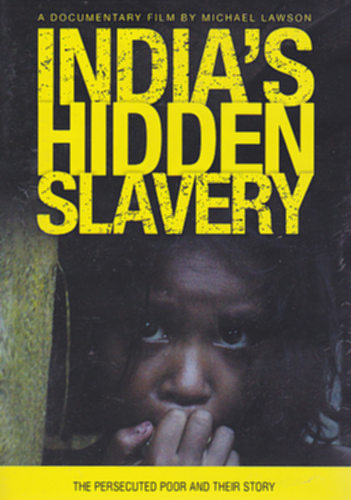 India's Hidden Slavery exposes contemporary slavery in India among the 250 million strong Dalit community. Once know as Untouchables, the Dalits form the lowest layer of India's millennia-old hierarchical system known as "caste". Dalits are routinely oppressed and abused as modern-day slaves: in bonded labour, in the sex industry, temple prostitution, in manual scavenging and other brutal forms of exploitation. The plight of the Dalits is little known in the West and their situation contrasts starkly with the widespread perception of India's current economic and tourist boom.

Below the surface is a society still wracked by caste divisions, with millions suffering and held hostage to a social structure that reinforces segregation, poverty and injustice. This hour-long documentary film, shot in villages and cities across India in late 2006 and early 2007, portrays extraordinary scenes of Dalit exploitation, together with firsthand testimonies of Dalits facing bonded and coerced labour and sexual exploitation. This is combined with expert analysis by prominent advocates for their cause, including contributions from former Prime Minster V.P. Singh, Dalit Freedom Network President, Dr Joseph D'Souza and from leading India political scientist, Professor Dr Kancha Ilaiah.

Additional contributions are from British MP's with experience of visiting Dalit communities and from distinguished India journalist and researchers. Their hidden slavery must not only be exposed, it must be eradicated. India's Hidden Slavery plays for 57 minutes. The DVD also contains a four minute trailer and the selection menu enables shorter sections such as "Pipe Village" to be shown on their own as a taster for the main film, or for small groups, study or discussion purposes.

Eclipse of the Gospel

The Lord of Glory Crucified