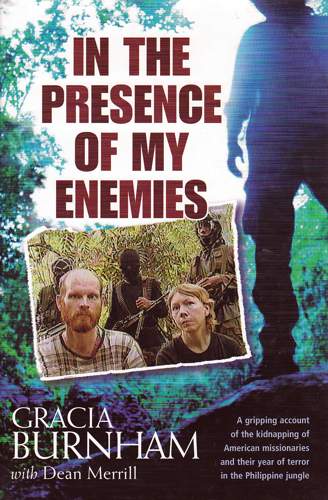 In the Presence of My Enemies by Gracia Burnham with Dean Merrill and published by Tyndale.

Soon after September 11, the news media stepped up its coverage of the plight of Martin and Gracia Burnham, the missionary couple captured and held hostage in the Philippine jungle by terrorists with ties to Osama Bin Laden. After a year of captivity, and a violent rescue that resulted in Martin's death, the world watched Gracia Burnham return home in June 2002 with a bullet wound in her leg and amazing composure. In this riveting personal account, Burnham tells the real story behind their harrowing ordeal, about how it affected their relationship with each other and with God, about the terrorists who held them, about the actions of the U.S. and Philippine governments and about how they were affected by the prayers of thousands of Christians throughout the world.

Depression: Looking Up From the Stubborn Darkness

D is for Depression