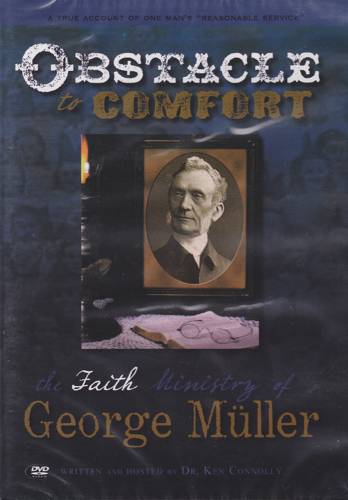 Obstacle to Comfort is a 55-minute video on the life of George Müller of Bristol. The man became a legend in his own generation. He was the builder of schools, a supporter of missions and a father of some 10,000 orphans. The amazing issue of his life does not lie with what he did, but in how he accomplished it.

He operated by faith. He relied solely on God to meet all his needs. He refused to accept donations from unbelievers, and when he started his scriptural knowledge institution to accomplish these tasks, between him and his partner they possessed no more than one shilling, or twelve pence. He refused to inform anybody regarding his needs, mentioning them only to God, in private, on his knees. But look at what he accomplished.

In reviewing the 63 years he spent in a faith ministry, the results are staggering. The schools collectively had 121,683 students. The orphanage had five mammoth buildings. He accommodated the needs of 10,000 orphans. It is believed that 2,813 orphans left the institution as believers, and they in turn led thousands more to Christ. It is believed that of the 2,000 students in the orphanage, when Mr. Müller closed his diary, 609 of them were believers.

Our Perfect God - A Summary of the Attributes of God