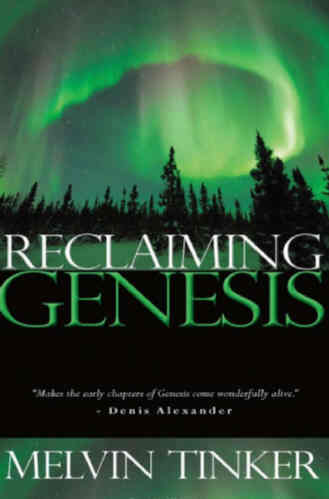 Reclaiming Genesis by Melvin Tinker and published by Monarch Publications.

Some argue for a literal treatment of the first 12 chapters of Genesis; others accept some form of deistic evolution. But what is its real message? Melvin Tinker argues that we should focus on the intended meaning of the text. Genesis challenges the nations surrounding Israel to a different view of the world. For example, God has no genealogy, unlike gods of surrounding nations. 'The two great lights' are so described because the words 'sun' and 'moon' referred to regional deities. When God rested on the seventh day, the day of contemplation of his good creation, this would have upset the Babylonians who considered seven an unlucky number. This is just the start. Genesis is pregnant with meaning and challenges to both the ancient world and the world today. Here are the foundational themes of the Christian faith: God's mercy; human dignity and purpose; God's mission to heal the nations.