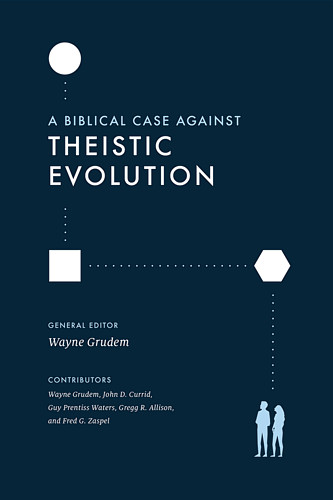 A Biblical Case against Theistic Evolution by Wayne Grudem and published by Crossway Books.

Even Christians strongly debate Scripture’s account of creation, with some declaring that major events in the book of Genesis—from the origin of Adam and Eve to God’s curse on the world—were purely symbolic. Several respected scholars endorse this theory, but is it consistent with the Bible’s teaching? In A Biblical Case against Theistic Evolution, condensed and adapted from Theistic Evolution, Wayne Grudem and other leading scholars challenge the belief that Genesis is mostly symbolic, rather than a true, historical narrative. Grudem examines 12 specific events in Genesis 1–3 and explains why acknowledging their historicity is critical to understanding the rest of Scripture.

He also emphasizes several foundational doctrines, including God’s ongoing involvement in creation, the beginnings of mankind, and the origin of sin and death, to show readers how the theory of theistic evolution undermines essential truths throughout the Old and New Testaments.