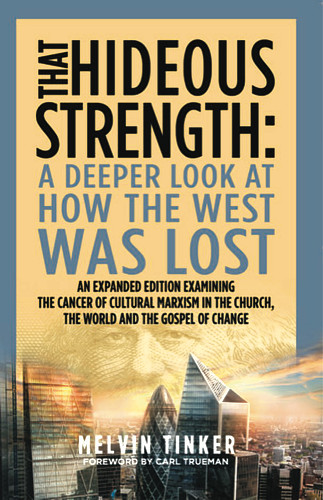 That Hideous Strength, A Deeper Look at How the West was Lost by Melvin Tinker and published by Evangelical Press.

In 2018 EP published the original That Hideous Strength: How the West was Lost; the book originated as lecture notes author Melvin Tinker prepared for a conference in Jerusalem that year. That edition deliberately had no footnotes and was as compact as possible to appeal to a wide audience. There have been many requests for a footnoted and expanded edition.

This book is an expanded version of the previous edition—it is about a third larger. The original acted as a ‘primer’ and ‘wakeup call’ to enable Christians especially to try and understand what has been happening in our Western culture for the last few decades due to the influence of what is identified as ‘cultural Marxism’ or ‘Critical Theory’ Many commented that it helped them make connections not seen before; for others, it was an ‘aha moment’, with the light suddenly being switched on as to why much of the Judeo-Christian foundations of the West have been eroded while the Church sleeps A number of reviewers rightly said it would have been helpful to have had the works quoted referenced and expanded with footnotes that has now been corrected.

As well as unpacking in more detail some of the ideas of cultural Marxists and the way their strategies are being worked out in our society, I have also sought to put more flesh on what the Church’s response might look like by drawing attention to what has been called ‘the Benedict Option’ and developing the concept proposed by Charles Taylor—the ‘social imaginary’ Another significant addition is an outline of the ideas of classical Marxism which places the current concern for cultural Marxism in its proper historical and philosophical context It also serves to underscore that in many ways the ‘new Marxism’ is a revamping of the ‘old Marxism’ with consequences no less disastrous.

Destiny, Learning to Live by Preparing to Die, Ecclesiastes

The Gospel Comes with a House Key

Born Again This Way - Coming Out, Coming to Faith, and What Comes Next