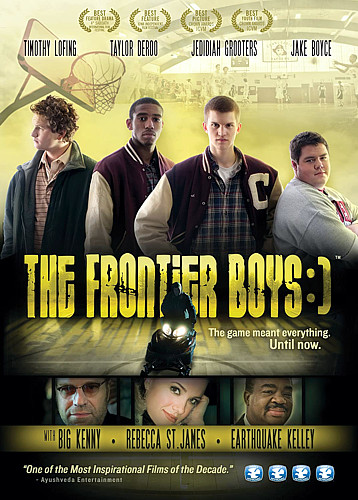 DVD - The Frontier Boys by Grooters Productions and published by Lifeway Films.

n the last gasp of winter in a small Northern Michigan town, four high school sophomore boys are living on top of the world. Best friends, classmates, and peers, T.J., Jed, Jackson and Brent are all starting players for an undefeated varsity basketball team. Jackson, their loudmouthed hyper-enthusiastic friend, makes more noise for his three friends than an entire cheerleading squad. All four share a history of companionship, a notable nickname, and all the confidence and exuberance of youth.

On a cold Sunday night, Brent is expected to meet Jed, Jackson, and T.J. for a skating party at the local rink, but he never shows. Instead, Brent and his friends are the victims of an unspeakable act of violence that shatters their small town. While the families struggle to make important decisions and recover from the tragedy, the team tries to regain their identity and success.