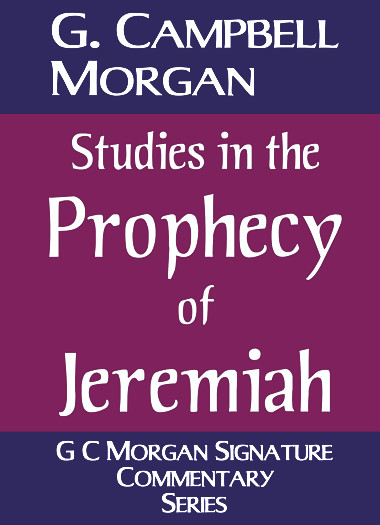 Studies in the Prophecy of Jeremiah - CCS by G Campbell Morgan and published by Classics Publications.

The “Prince of Bible Expositors” presents the stirring events of Jeremiah's career in this volume - one of the most oustanding works on this subject ever published. In these chapters, the character of this “prophet of strength and tears” is analyzed and appraised, and his dealings with the people are carefully pursued and portrayed, while his “prophetic utterances which constituted the word of Jehovah to a decadent age” are interpreted in a masterly manner.

This unabridged edition embraces the penetrating analysis and warm devotional spirit which characterizes all of Dr. Morgan's writing. The world has seen but one G. Campbell Morgan, whose messages are as popular, effective, and inspiring today in printed form as they were when preached from the pulpit. What the artist portrays with his brush, G. Campbell Morgan reveals with his pen, a pen that never rested from its labours in the cause of Christ.

Slogging Along in the Paths of Righteousness: Psalms 13-24

What is a Biblical Christian (Classic Booklet) - CBS