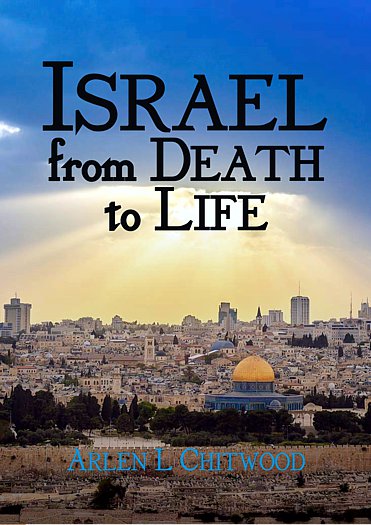 Israel from Death to Life by Arlen L Chitwood and published by Classics.

near the time which the Prophets had declared that God would re-gather and restore His people to their land (cf. Isa. 1:25-2:5; Ezek. 39:25-29: Joel 3:1-21). But, are the events of May 14, 1948 the beginning of this restoration? And are the things which have occurred during the more than six decades since that time - a return of millions of Jewish people to the land, numbering some 6,000,000 today - a continuation of this restoration?

Then there is a reclamation of parts of the land - cities built or rebuilt and parts of the land transformed from vast wastelands to fertile farmlands. Are these things part of God's restorative promises through His Prophets? There is an inseparable connection of the Jewish people with their capital city and their land. Both the city of Jerusalem and the land of Israel are, at times, spoken of in a synonymous respect with the Jewish people (Lam. 1:7, 8; Jer. 22:8, 9; Ezek. 14:11-13; Hos. 1:2; Matt. 23:37). Thus, one cannot be restored apart from the other. That being taught by most Bible teachers today concerning events in the Middle East - an on-going restoration of the people and the land, including Jerusalem and other cities - connect these events with God's restorative promises through His Prophets.

Know and Tell the Gospel

Did the Devil Make Me Do It? - Questions Christians Ask