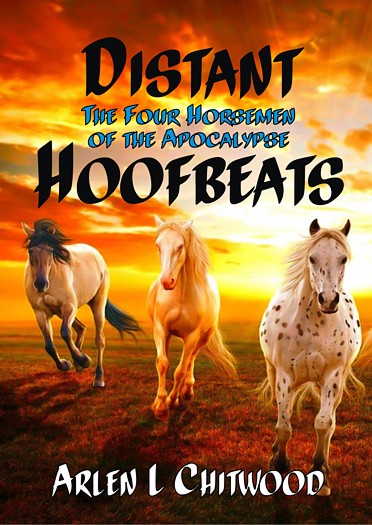 Distant Hoofbeats; The Four Horsemen of the Apocalypse by Arlen L Chitwood and published by Classics.

All mankind, both the living and the dead throughout the past 6,000 years of man's existence, has a date with destiny. No one is excluded; all are included. And that day is fast approaching. This book deals with one major facet of the matter - things which the Prophets wrote about millenniums ago which are about to transpire upon this earth, things having to do with Israel and the nations following the removal of the Church.

And these are not things which will occur in some distant, far-away future. Rather, the present dispensation is almost over. Man’s Day has almost run its course. We are almost there. God works with pre-established, set times, which He Himself established and set; and He is about to, once again, step into man’s affairs, with major changes to then follow.