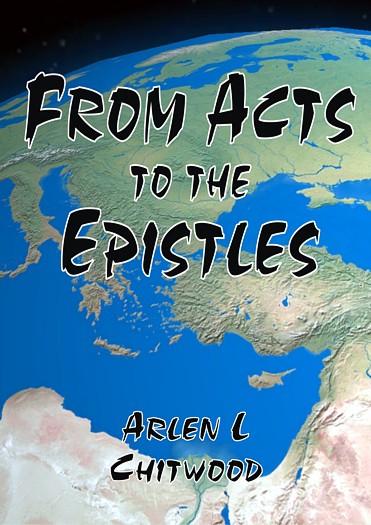 From Acts to the Epistles by Arlen L Chitwood and published by Classics. Scripture deals centrally with man in relation to a province within the kingdom of God - this earth. This province forms a kingdom within the overall kingdom of God, and man was created to rule this kingdom. The kingdom which man was created to rule has two spheres - an earthly sphere, and a heavenly sphere. And the kingdom is ruled from the heavens over the domain - from the heavens over the earth. God rules the whole of His universal kingdom in this manner (from a place in the heavens over His universal kingdom), and this is the manner in which He has established the governmental rule of individual provinces in His kingdom as well.

Both spheres of the kingdom are clearly seen in the Old Testament (e.g., Dan. 6:1ff; 10:13ff); but, in relation to man, the Old Testament deals more specifically with the earthly sphere, and the New Testament deals more specifically with the heavenly sphere. Accordingly, this book, FROM ACTS TO THE EPISTLES, has to do with man in relation to the heavenly sphere of the kingdom, not the earthly sphere. And this would be easy to understand through noting the clearly revealed content of the New Testament as a whole.

The Price and Power of Revival

Unlocking the Mysteries of Genesis