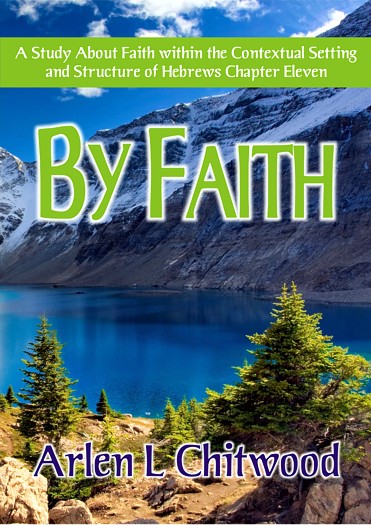 By Faith, Study About Faith in Hebrews 11 - CCS by Arlen L Chitwood and published by Classics.

Hebrews is a book built around five major warnings, all drawn from a history of Israel, up to and including the time Israel's Messiah was on earth the first time. The warnings though are directed, not to the Jewish people, but to Christians; and all five warnings, presenting the same subject matter from different standpoints, have to do with the salvation of the soul. Hebrews chapter eleven, placed in the book chronologically between the fourth and fifth warning passages (passages in the tenth and twelfth chapters) forms an apex in the book relative to "faith" and the saving of the soul.

Moving from chapter ten into chapter eleven, the saving of the soul is clearly seen as the goal of "faith" (ref. Chapter 1 in this book). Not only does Hebrews chapter eleven deal with faith to the saving of the soul but this chapter in Hebrews is structured after a fashion that numerous dispensational truths regarding the Jews, the Gentiles, and the Church of God are also dealt with.

The entire drama of human history, from man's beginning in Eden to that toward which all Scripture moves - the Messianic Kingdom - is set forth through a Divinely arranged dispensational plan, using selected individuals and events. And through these individuals and events (events occurring under God's sovereign control of all things) that which God deems of primary import in the complete 6,000 years of Man's Day, leading into the 1,000-year Lord's Day, that time when the salvation of the soul will be realized, can be seen. Thus, if one wants to see that which God deems of primary import relative to bringing His plans and purposes regarding mankind to pass, Hebrews chapter eleven would be one place to go.