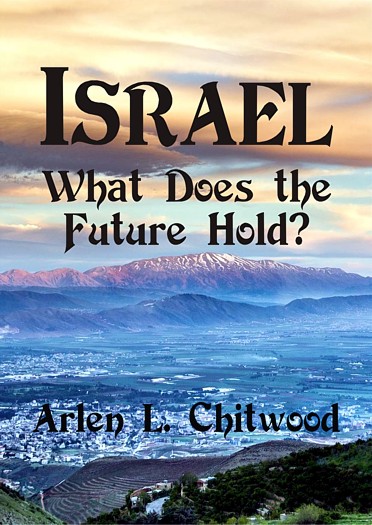 Israel: What Does the Future Hold? by Arlen L Chitwood and published by Classics.

An intractable Middle East problem faces man today, one which can only become worse and worse with the passage of time, Until…The reason for the problem is the existence of an Israeli nation in the midst of mainly Muslim nations - a nation presently comprised of some 6,000,000 Jews who have returned to the land covenanted to Abraham, Isaac, and Jacob before it is time for the Jewish people to return.

The “Jewish people” have returned to the land in unbelief, prior to repentance, prior to their conversion, and while the house still lies desolate (Ex. 12:1ff; Dan. 9:24-27; Mt. 23:37-39). They have re-entered a house which Christ left “empty, swept, and garnished,” awaiting judgment magnified seven times for their actions, which is what it will take to bring the Jewish people to repentance (Mt. 12:43-45). God, in time past, because of the Jewish people’s continued disobedience, extending over centuries of time, uprooted.

Until repentance is forthcoming, God will not act. God will act with respect to a deliverance of His people only after His purpose for uprooting them from their land and driving them out among the nations has been realized. God’s Word is crystal clear on the matter. In this respect, what is an unrepentant and unconverted Israeli nation doing back in the land? And what are the ramifications of the Jewish people being back in the land under existing conditions?

The preceding is what this book is all about - not what man may think, but what Scripture has to say. Numerous facets of the matter are covered from different passages of Scripture, with the emphasis on current Middle East conditions and where things are headed.