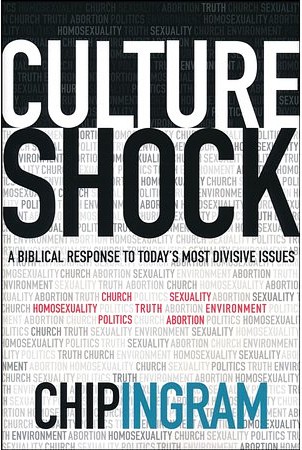 Culture Shock: A Biblical Response to Today's Most Divisive Issues by Chip Ingram and published by Baker Books.

We live in a reactionary culture where divisive issues arise, people on either side throw stones, and everyone ends up more entrenched in their opinions than in reaching common ground--or even exhibiting common courtesy! If there ever was a time for Christians to understand and communicate God's truth about controversial and polarizing issues, it is now. Believers must develop convictions based on research, reason, and biblical truth--and be able (and willing) to communicate these convictions with a love and respect that reflects God's own heart.

In Culture Shock, bestselling author, pastor, and radio personality Chip Ingram shows readers how they can bring light rather than heat to the most controversial and divisive issues of our day. Covering topics such as right and wrong, sex, homosexuality, abortion, politics, and the environment, Culture Shock is every engaged believer's must-have guidebook to replacing reactionary hate with revolutionary love.

Confident, Why We Can Trust the Bible