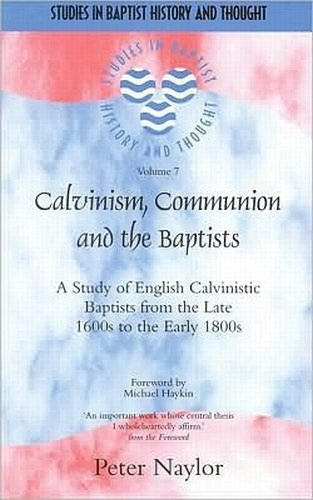 Calvinism, Communion and the Baptists: a Study of English Calvinistic Baptists From The Late 1600s To The Early 1800s (Studies in Baptist History and Thought) by Peter Naylor and published by Paternoster.

This book is concerned with English Calvinistic Baptist churches from the later 1600s until the early 1800s, arguing that there was then no connection between "restricted communion" and "hyper-" or "high" Calvinism. A minimal definition of "restricted communion" would be the reception at the Baptist communion of those alone who had been immersed in water upon a profession of faith. A sketch of English Calvinistic Baptists in the years preceding and following the 1689 Act of Toleration stresses that they were a denomination other than that of the "General" Baptists, and that most Baptists, irrespective of party lines, were de facto "Strict Baptists." Historical arguments for and against restricted communion will demonstrate that during that period there was no definitive link between the Particular Baptists' communion discipline and their interpretations of Calvinism. Attention is given to John Gill's and Andrew Fuller's interpretations of the relation between the atonement and evangelism.

Thy Word Is Still Truth