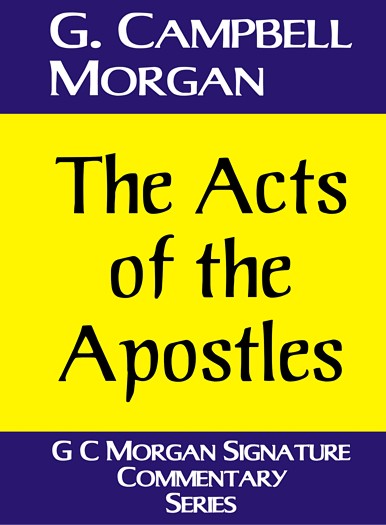 The Acts of the Apostles - CCS by G C Morgan and published by Classics.

This book by no means a full history of the period it covers, but that it is rather a selection of incidents revealing the lines and tendencies, the principle and passion, of that first generation of Christianity in the world. In this is at once its charm and its value. Each new page flames with some surprise, and one is held in suspense to the end and then left to dream dreams of all that has not been recorded and of all that followed after. Nevertheless every story reveals principles and laws, operating with undeviating regularity, and contributing the secrets of the amazing spread of that which had seemed threatened with extinction at Golgotha but which rose into power on the Resurrection morning, and began a propagation of sweeping victory at Pentecost.

Acts of the Apostles is really intended as a handbook to the reader who desires a true apprehension of the spiritual force and method of these first years of Christianity at work in human history. My own work on the story has impressed me with the glorious regularity of the irregular in the work of the Church by the Holy Spirit. It is a powerful argument against the stereotyped in Christian organization and method; and consequently a plea for room for the operation of that Spirit, who like the wind Bloweth where He listeth.