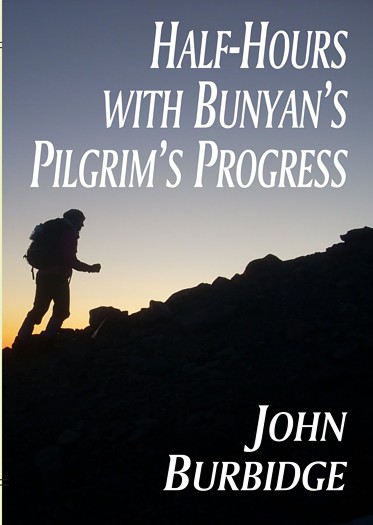 Half-Hours with Bunyan's Pilgrim's Progress by John Burbidge and published by Classics.

It is not really necessary to speak of the estimation in which many believers hold John Bunyan and his immortal Allegory of “The Pilgrim’s Progress.” This will be found in this book and especially in the introductory chapter. The remark of Coleridge admits of no improvement. He observed that the child reads “The Pilgrim’s Progress” for its story; the theologian for its doctrine; and the critic for its language. Hundred years have passed away since its first appearance, and yet the “Book of the Bedford Tinker” has not lost a particle of its popularity.”

The origins of this Book is a series of Lectures upon “The Pilgrim’s Progress” which were delivered many years ago, and it is the hope of the author that it will be helpful to believers – pastors or people in the pew – who take Bunyan’s immortal work as the subject for teaching their and worthwhile to promote the practice of

“Daily Half-Hour Readings” to those who desire to place in the hands of the young in years or in faith, a book which will be found loyal to all the leading features of Evangelical Religion –

and, above all, to those who in their daily devotional study read in this great Allegory the history of a soul which may serve, by the Divine blessing, to cheer them in their own pilgrimage from “this world to that which is to come.”

Candle in the Wind