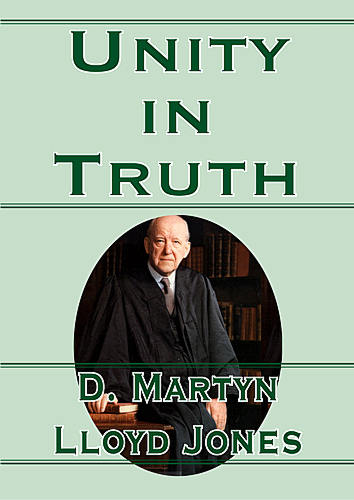 Unity in Truth by D M Lloyd Jones and published by Classics.

It was just a handful of people; but because of the life that was in it, and the power of the Spirit upon it, the early church was mighty. It shook the world. Today the picture is one of chaos and confusion, within the church as well as outside it. The church has become uncertain of her own message. The Christian faith is being queried, denied and ridiculed almost as never before. The Lord Jesus Christ is reduced to Jesus – a mere man. He has been robbed of His eternal sonship, His unique deity and all His miracles, His atoning work and His literal physical resurrection. Dr Martyn Lloyd Jones calls on evangelicals to unite in a clear and uncompromising stand for the truth once delivered to the saints, in a fearless proclamation of the Biblical gospel, which is the only answer to man’s desperate need, and in prayer for a fresh outpouring of the power of the Holy Spirit in revival.

Dr D. Martyn Lloyd Jones (1899-1981), one of the most remarkable preachers of this century, exercised a wide and influential ministry, which began in his native Wales and continues today through the many books that have been published. He is especially known as the minister of Westminster Chapel in London, a position he occupied for nearly thirty years. These addresses, originally given under the auspices of the British Evangelical Council (BEC), are still as relevant today as when they were first preached.

Good News to the Poor