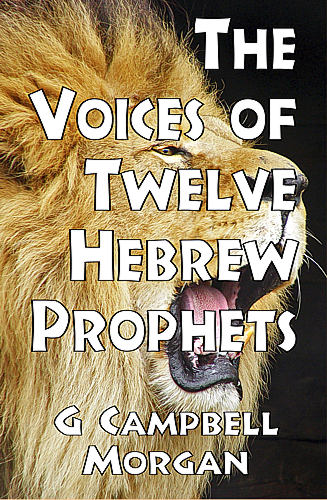 The Voices of Twelve Hebrew Prophets by G Campbell Morgan and published by Classics.

The principles of the Minor Prophets are still supreme. Man has not changed, that is, humanity has not changed. All that the prophets said needs saying today, and that with no uncertain sound. Rings and statesmen and politicians, and humanity generally, need to be called back to God, and back to His Throne in a great repentance, that is, a change of mind.

The New Testament distinctly declares: "To Him bear all the prophets witness." That is true, but for the moment I venture to take that great statement and put it in another form. He is the Fulfilment of everything to which the prophets bare their witness. They spoke of the sovereignty of God, but it was finally and fully declared through Christ. They declared that men, forgetful of that sovereignty, and breaking the laws of God, were doomed to punishment. That Christ made clear as the sunlight. They looked on to a day of ultimate victory and triumph, and in all His messages to men that fact is most clearly revealed.

Major Points from the Minor Prophets

Christian Leaders of the 18th Century

The Ability of God **