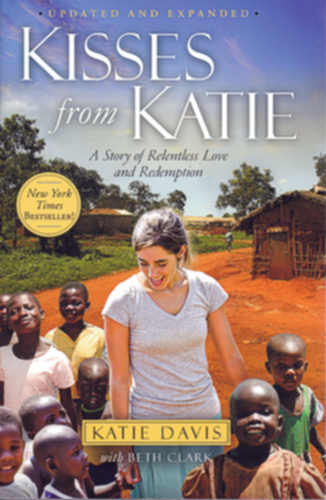 Kisses From Kate: A Story of Relentless Love and Redemption by Katie Davis with Beth Clark and published Authentic Media.

Katie was a normal American teenager when she decided to explore the possibility of voluntary work overseas. She temporarily 'quit life' to serve in Uganda for a year before going to college. However, returning to 'normal' became impossible and Katie 'quit life' - college, designer clothes, her little yellow convertible and her boyfriend - for good, remaining in Uganda. In the early days she felt as though she were trying to empty the ocean with an eyedropper, but has learnt that she is not called to change the world in itself, but to change the world for one person at a time. By the age of 22 Katie had adopted 14 girls and founded Amazima Ministries which currently has sponsors for over 600 children and a feeding program for Uganda's poorest citizens - so it is no wonder she feels Jesus wrecked her life, shattered it to pieces, and put it back together making it more beautiful than it was before.