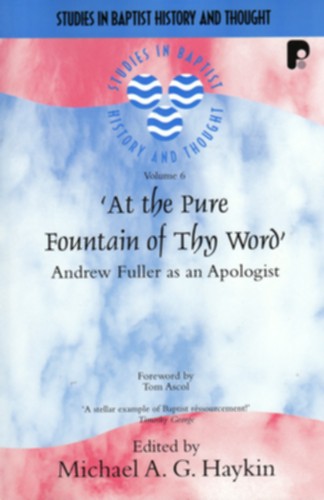 At the Pure Fountain of Thy Word: Andrew Fuller as an Apologist edited by Michael A G Haykin and published by Paternoster.

One of the greatest Baptist theologians of the eighteenth and early nineteenth centuries, Andrew Fuller has not had justice done to him. There is little doubt that Fuller's theology lay behind the revitalization of the Baptists in the late eighteenth century and the first few decades of the nineteenth. This collection of essays fills a much-needed gap by examining the major area of Fuller's thought: his work as an apologist. The book argues that the New Testament exegesis, which is at the heart of this reformulation, is fundamentally accurate and that the resulting system is theologically coherent. The book also argues that this view is not a Baptist novelty, but is rather a recovery of the foundational Baptist thought of the seventeenth century.