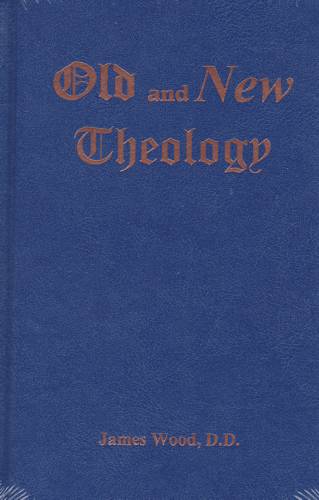 Old and New Theology by James Wood and published by Sprinkle Publications.

The historical track record of the church reveals her times of greatest liberty from persecution and Gospel proclamation also as her times of greatest peril. In those epochs, the Church actually faces her greatest foes: sadly those from within her own ranks. Well-intentioned adversaries only presume to promote kingdom interests, while they pervert its doctrines and mislead the people of god. Their persuasive aptitude to entice people to their doctrines and dispositions emanates chiefly through emotional appeals and human reasoning. Fortunately, this attraction is not universal, and a few stalwarts firmly withstand the onslaught and point out the promulgated errors.

Thus James Wood in his book Old and New Theology outlines the major doctrinal issues which precipitated the temporary division within the American Presbyterian denomination during the early to mid 19th century.