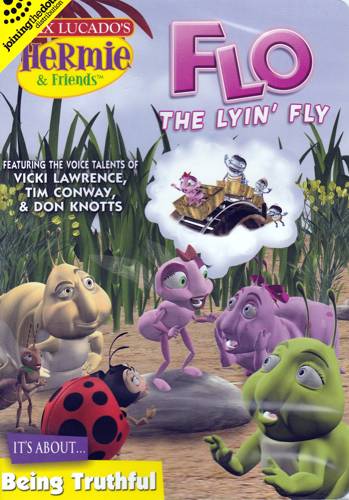 Flo: The Lyin' Fly, a prequel to Hermie: A Common Caterpillar, draws from Proverbs 19:5, which says that no one gets away with a lie. In it, Flo the Fly is abuzz with excitement as superstar bug band the Water Beatles want her to get them to the concert safely! She begs everybody to help--but Flo has not been shy about telling a lies, and because of her falsehoods, her friends don't believer her. Through the incredibly humorous situations, entertaining songs, and cleverly written dialogue, children will learn the importance of telling the truth no matter what the circumstance. They'll also be challenged to not "cry wolf," or even embellish the truth just a little to make themselves look better.

Joining the all-star cast of Tim Conway, Don Knotts, and Melissa Disney is Third Day as the Water Beetles, Frank Peretti as Puffy the Dragonfly and Vickie Lawrence as Flo! You'll also see Hermie and Wormie in an animated "short" called "The Flood of Lies"! Running time: Approximately 60 minutes. Recommended for ages 4 to 10.

After the Heavy Rain

A Young Woman's Call to Prayer

A Young Woman's Walk with God